The Berlin Limner
About the Artist 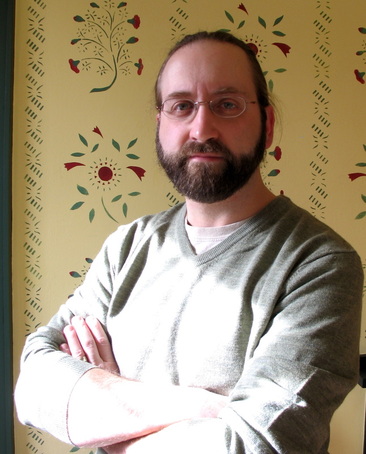 After a childhood in New York’s southern tier and southeastern Pennsylvania, Matthew McKeeby attended the University of Pennsylvania in the late 1980s, majoring in English.  After college, he moved upstate New York where he worked with at-risk youth for eight years before pursuing his MAT in teaching English at Union College, where he met his wife, Joann Harnden.  Together they settled in rural Berlin, NY where they are restoring a c.1810 farmhouse.  Matt teaches theatre arts and English at Averill Park High School, where he advises the the school theatre company, The Off-Broadway players.

Having grown up in a home full of antiques and art, and with a life long interest in folk art, illustration, and history, Matt began painting seriously in the 1990s.  Early paintings created as gifts led to commissions and sales through local shows.  In 2009 Matt was first selected as a top artisan by Early American Life’s Directory of Traditional American Crafts, and continued as a Directory artist through 2014.  After initially specializing in reproductions of  works by Quaker artist Edward Hicks, Matt’s work has diversified into a variety of traditional subjects including reproduction and original portraits, decorated furniture and boxes, murals, carving, stencilling, and other period style work.  He even creates a very limited selection of  mixed media sculpture featuring the Germanic Christmas devil, Krampus.  His work appears in collections nationwide, and has appeared in shows at Hancock Shaker Village and the Mennonite Heritage Center, as well as many smaller local venues.

Matt’s work was profiled as part of an article by Gregory LeFever on animal portraits in the February 2012 issue of Early American Life magazine.  You can read the article by clicking here.

A short interview with Matt was also published in the Troy Record, and is available here.

To see images of Matt & Joann's house restoration, visit a gallery of that project here.